John has served as Board Chairman and President of the Investment Adviser Association, a national organization that represents the interests of SEC registered investment firms. He has also served as a Trustee and Board Chairman of YMCA Camp Belknap, and as Honorary Trustee of the New England Baptist Hospital, having previously been Board Chairman. He is a former Director of Care Group, Inc., a holding company for Beth Israel Deaconess, Mt. Auburn and New England Baptist hospitals. John is also on the investment committee of the Carleton-Willard Village, Inc. retirement community. In his home community, John is the Endowment Chair of the Eliot Church and was a founding trustee of the Wellesley Free Library Centennial Fund.

John holds the designation as a Chartered Financial Analyst (CFA). He is a member of the Boston Economic Club.

Michael is very involved with his undergraduate alma mater, having served as Chairman of the Boston Bates Business Network. He holds the Chartered Financial Analyst (CFA) designation and is a member of the CFA Society Boston and the Boston Economic Club.

His previous experience includes working in product marketing at XOS Technology, Inc., holding assistant coaching positions with several NCAA basketball programs, and assisting the coaching staff of the NBA’s Cleveland Cavaliers. He holds the Chartered Financial Analyst (CFA) designation and is a member of the CFA Society Boston.

Tom is a graduate of Carnegie Mellon University where he received a bachelor of science degree in business administration with a concentration in finance. Tom specializes in equity research at Wilkins with a particular emphasis in the technology sector. His previous experience includes equity research at Boston American Asset Management and Prudential Equity Group. He holds the Chartered Financial Analyst (CFA) designation and is a member of the CFA Society Boston.

Areeb is a graduate of Boston University where he majored in economics. He earned a Masters in Finance from Boston College. Areeb specializes in equity research at Wilkins. His previous experience includes public equities research at Liberty Mutual as well as analyst work at The De Burlo Group. He holds the Chartered Financial Analyst (CFA) designation and is a member of the CFA Society Boston.

Dave is a graduate of Saint Anselm College where he majored in history. His previous experience includes serving as operations manager at Contravisory Investment Management and as an investment associate at Congress Asset Management.

Beth is a graduate of Anna Maria College where she majored in business administration. She earned a Masters in Finance from Brandeis University. Her previous experience includes working for several financial service firms in the Boston area including Prio Wealth Management (formerly Seaward Management) for 8 1/2 years and Columbia Management Investment Advisors (formerly Fleet Investment Advisors) for 7 1/2 years.

Lauren is a graduate of Merrimack College where she majored in business administration. Her previous experience includes client service for Centinel Financial Group 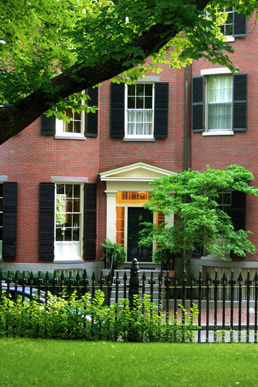